Normally a news-letter from Sophie and Me, means a new pattern published.
Not today!
My pc crashed, so today I will do something different;
I will send you a Christmas card!
With a special greeting for you! See end of letter!
Special discount in my shops to the end of the year! 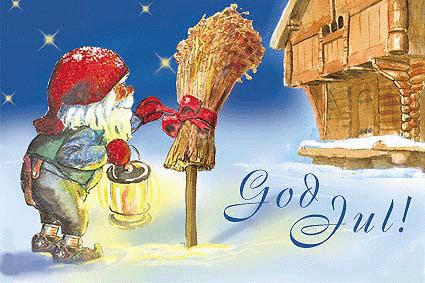 If you are a grow-up, you will remember these cards everyone sent to everyone, every year before Christmas, with the same greetings on all the cards. With stamps on, sent by the postal system, not electronically!Christmas-cards have their own tradition in every nation, and so we have in Norway, my mother-land.Looking at old cards, they give the impression that Christmas is a special event for Norway only, very patriotic! And it’s always snow on the motives!And often our traditional Nisse (Gnome) is part of the motif.I admit, I get very nostalgic in end of December!I will not go into the religious aspect of Christmas, which can be SO different world-wide for us all.I will however present the Norwegian Nisse to you! A very special "man". 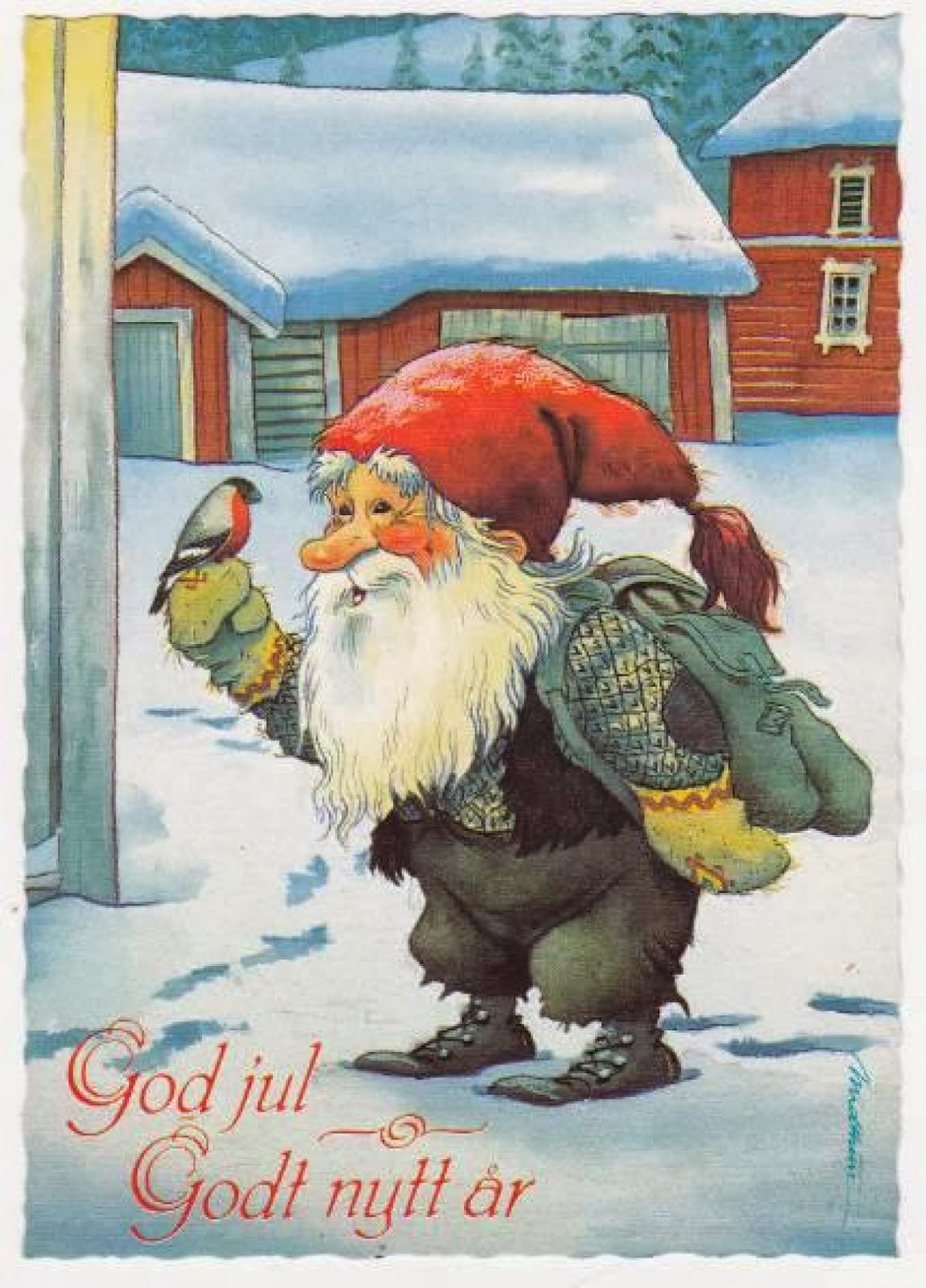 THE STORY ABOUT NISSE (THE NORWEGIAN GNOME)
The Barn-Gnome (Fjøs-nissen) is a creature from Norwegian
(and Scandinavian) folklore. 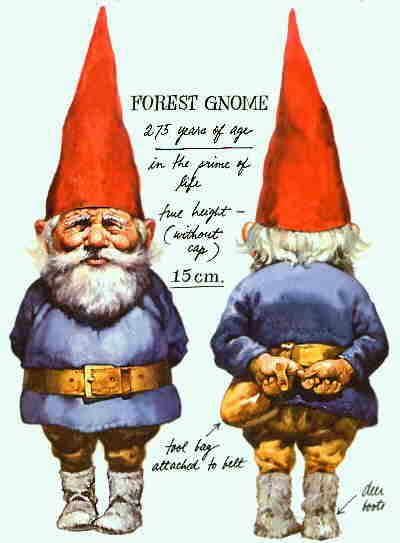 There were also forest-gnomes and mountain-gnomes mind you!
Small people! 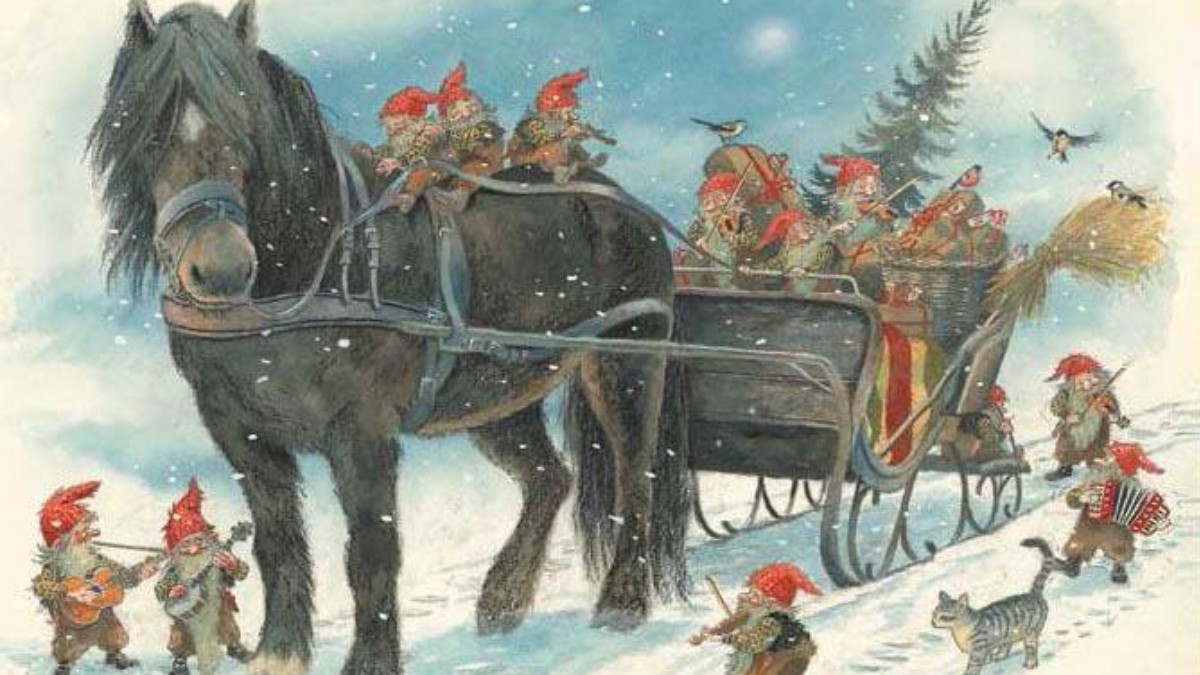 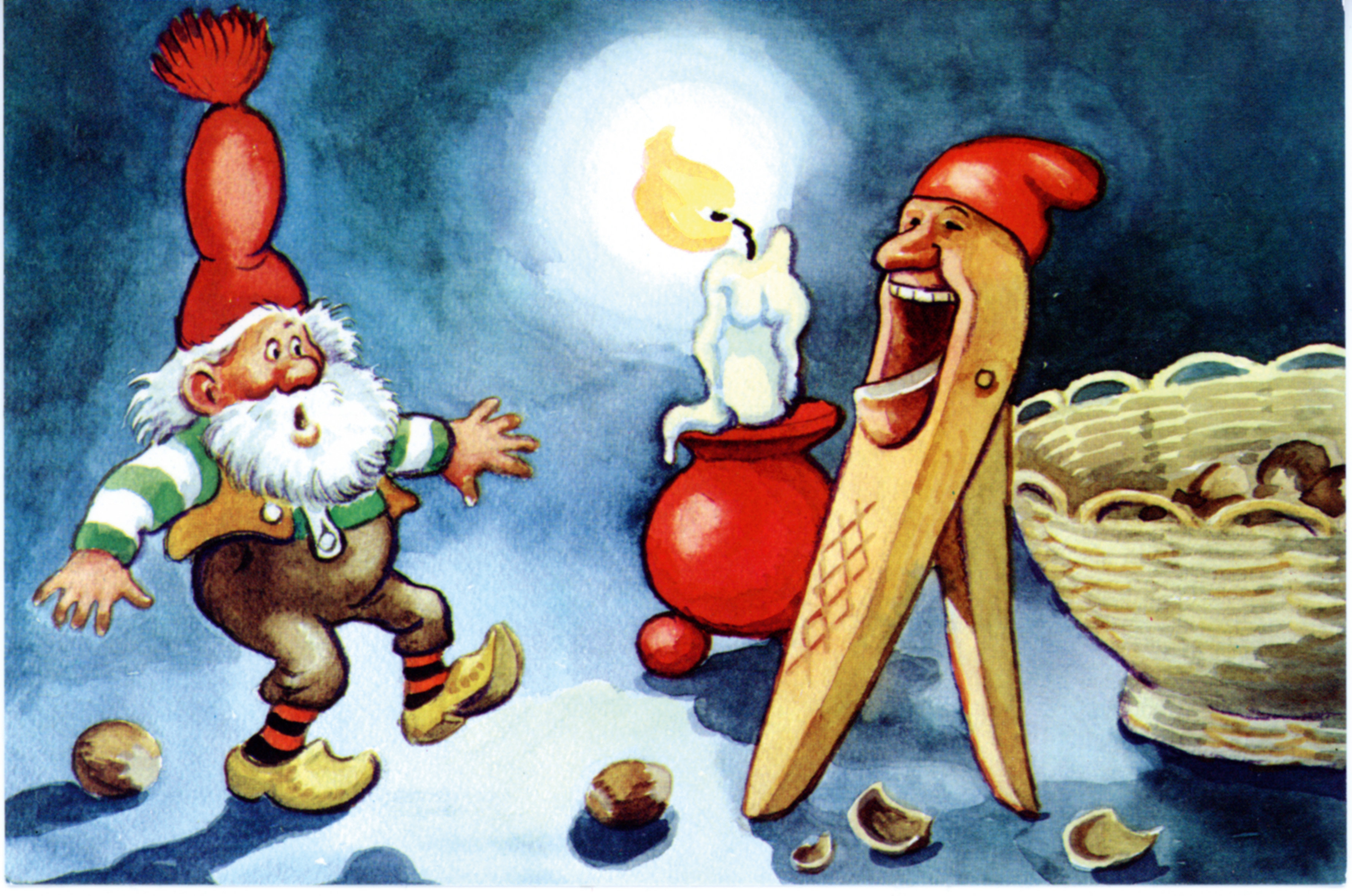 Nisse was always in good mood, happy and satisfied, if left in peace!
He was a short man, “no taller than a horse’s head”. Sometimes even smaller!
He always wore dark knickers, knee-high socks, and shirt with a vest or a sweater, wooden clogs or leather boots, and a red knitted cap.
He had long grey or white beard, and… he had only four fingers!
Not many people know that fact!
And of course he could ski, as any good Norwegian! 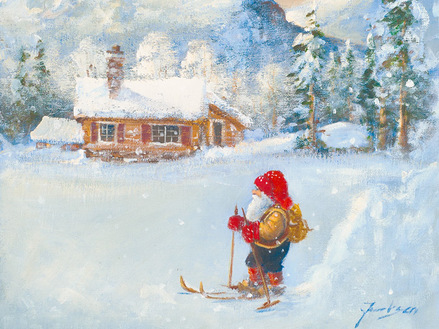 He was very shy, and hardly ever seen. May be due to his red hat, which was grey on the inside, and if he wore it inside out, he turned invisible!
Nisse has supernatural powers. He is many times as strong as people, and also many times older!
Nisse take care of his household, so the farmer never run out of flour and food.
In folklore and literature, he has been described as the guardian of the farm.
He was a good little helper, as long as the farmer treated him well. 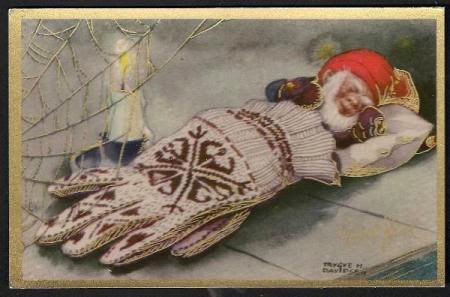 Especially at Christmas he would expect to get a large bowl of sour cream porridge with a big "eye of butter" in the middle, and home-brewed beer, in return for looking after the livestock. 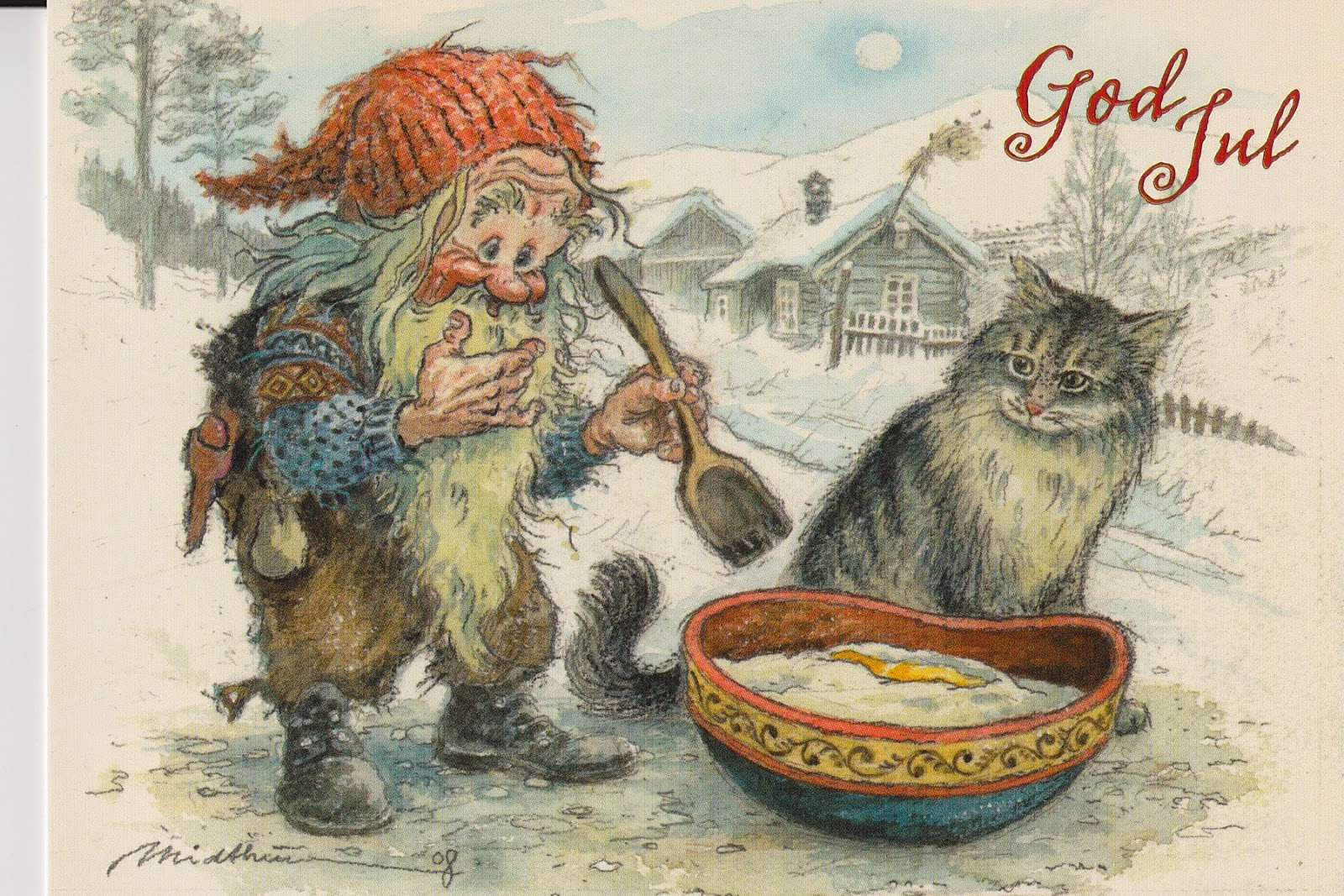 When the people on the farm went to find the bowls the next morning, the dishes would be empty and clean.
That was proof enough that Nisse really existed! 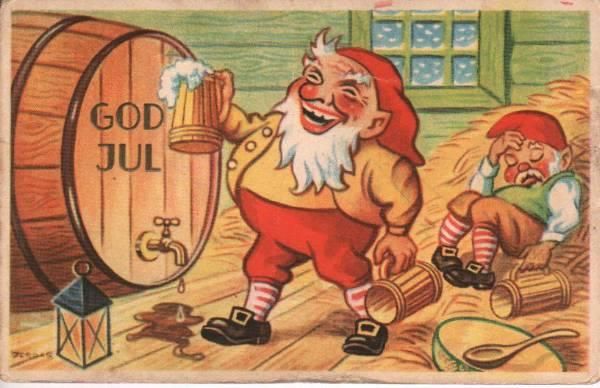 Often the farmer would leave leftovers from Christmas dinner on the table at night, so Nisse could help himself. Of course, the next day the food was gone!
But if the farmer failed to keep him fed and happy, Nisse would do mischief, or even harm, to both animals and people!
He would be the one responsible when anything strange, or unexplained happened on the farm. 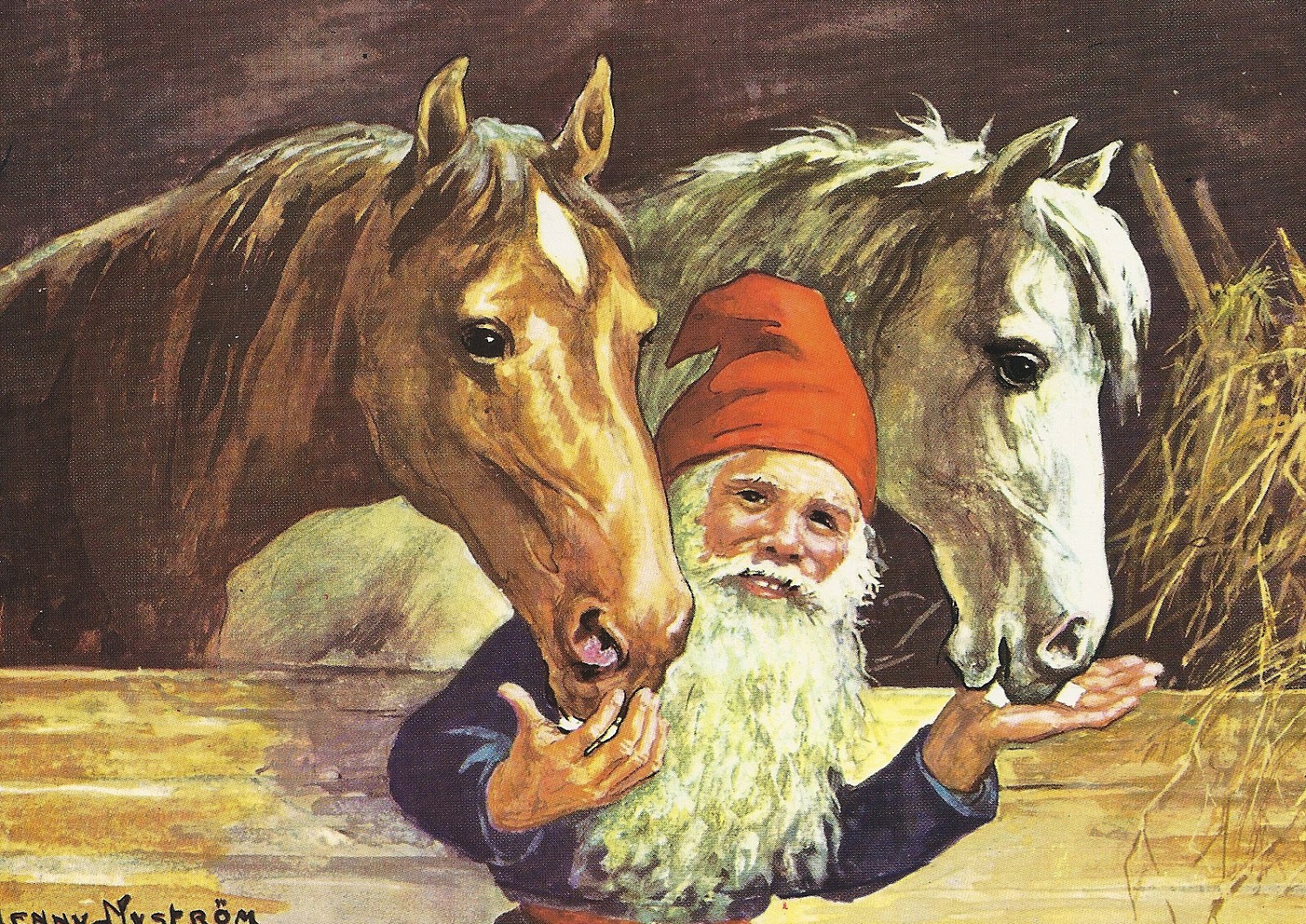 For example, because he enjoyed helping horses more than cows, he would steal hay from the cows to give an extra portion to a favorite horse!
One story tells that Nisse, finding that the farmer had forgotten to put butter on his porridge, got angry and killed the farm’s best milking cow!
Later he found out that the farmer had simply put the butter in the bottom of the bowl, and the porridge on top. Regretting his mischief, Nisse went and stole a milking cow from the neighbor’s farm, to replace the one he killed! 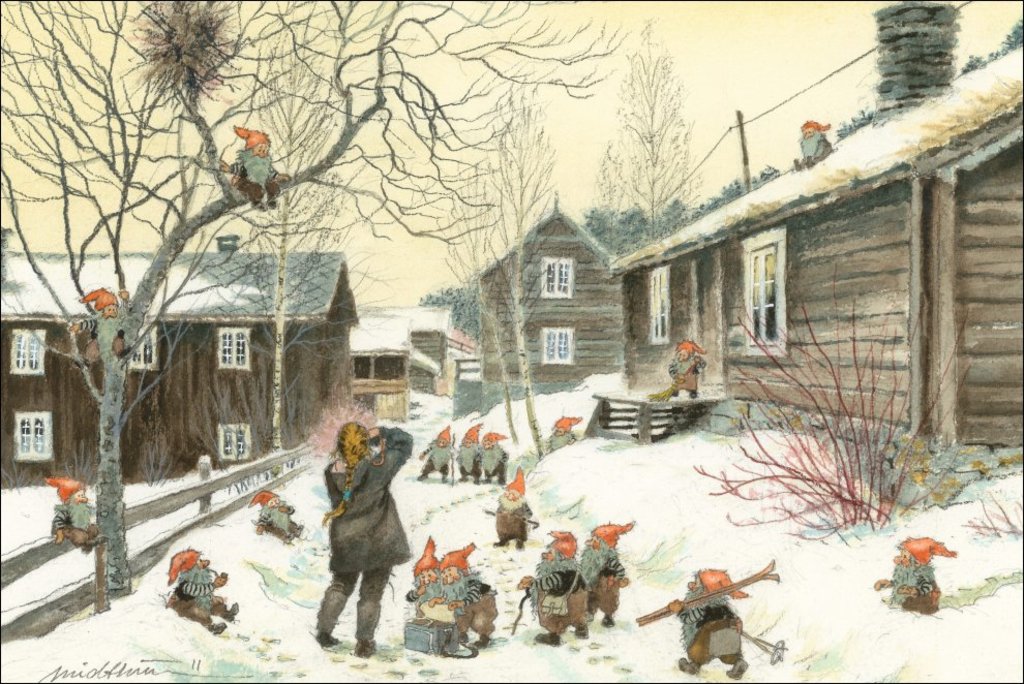 Norwegians know deep in their heart that Nisse exists! That is why they still fill wooden bowls with porridge and take them to the barn on Christmas Eve, because no one can really be sure!
Today, Norway also has the tradition of the Julenisse (Christmas-gnome), a result of mixed and combined traditions and cultures, inspired by the story about the holy Nicolaus (the American Santa Claus). 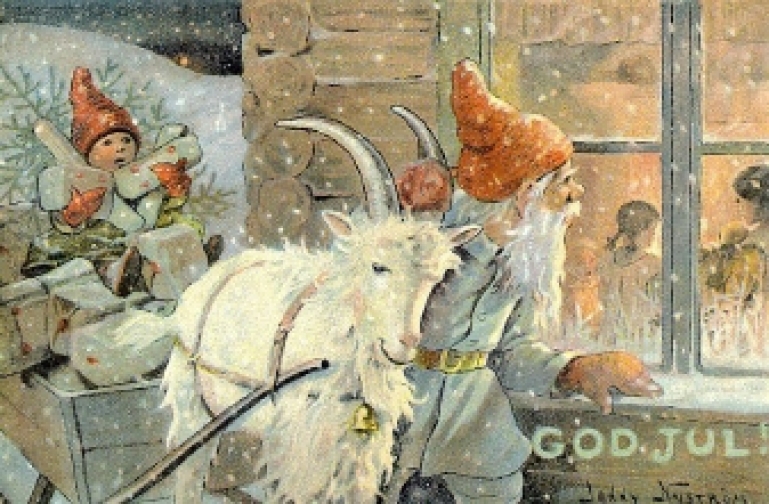 The Julenisse looks a lot like the regular Nisse, only taller.
He visits the household on Christmas Eve with presents and the greeting;
“Are there any good children here?”.
Often he demands the children to sing for him, before they get their presents.
Wouldn't you like to meet Nisse!?
Oh yes, he has a family too!
That's another story!
AND HERE ARE MY GREETINGS FOR YOU!
First of all;
I wish you Happy and Peaceful celebrations of these last days of 2016! 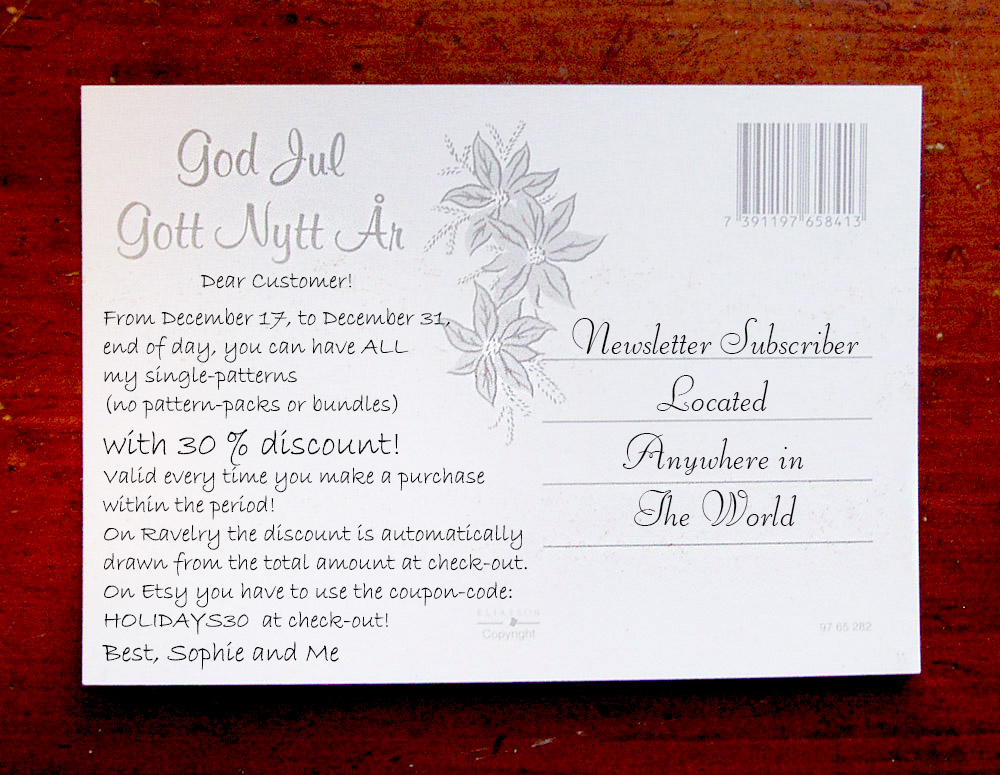 In clear text:
From December 17, to December 31, end of day, you can have
ALL my single-patterns (no pattern-packs or bundles)

Valid every time you make a purchase within the period!

On Ravelry the discount is automatically
drawn from the total amount at check-out.

On Etsy you have to use the coupon-code:
HOLIDAYS30
at check-out!
Thank you for following me to the end! Of the year!
Ingunn,
Sophie and Me
Email Post 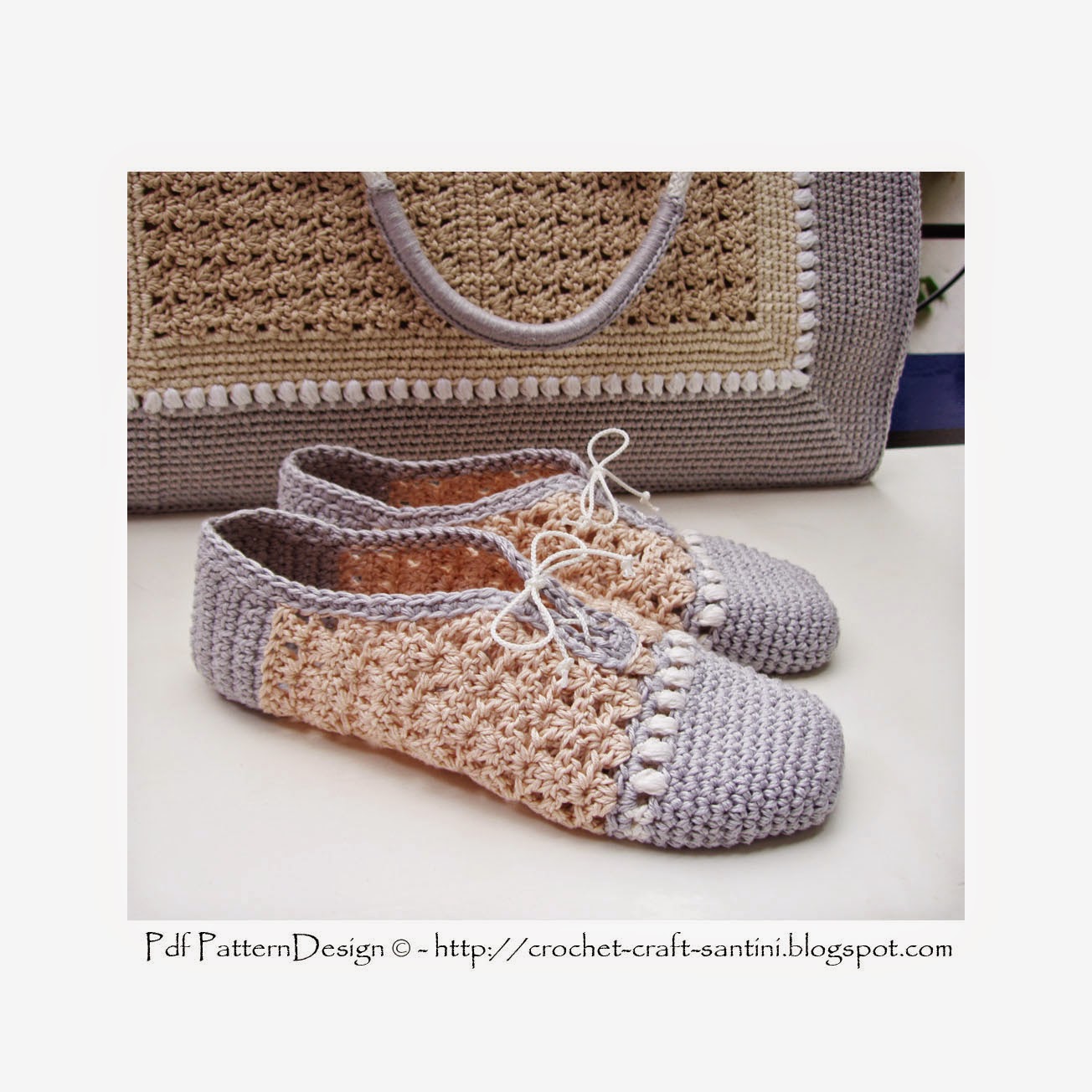 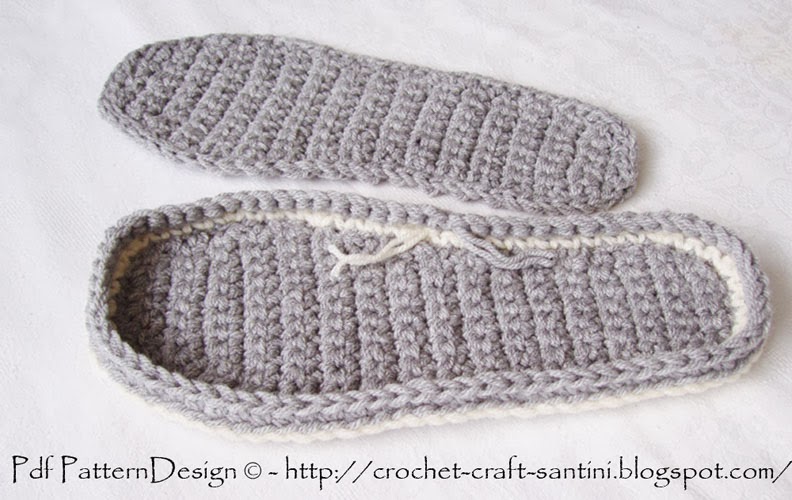 ABOUT MY CORD- AND CROCHET SOLES. TURN SLIPPERS INTO STREET SHOES! 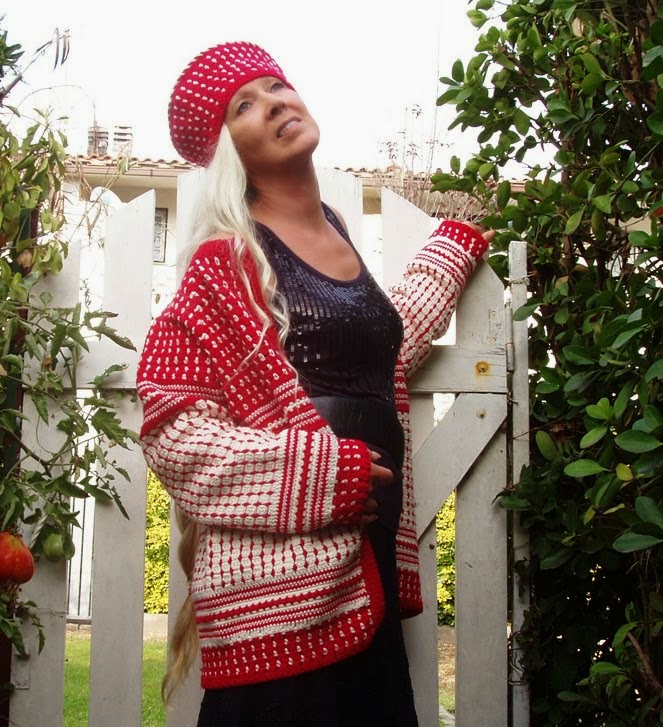 Crochet Pattern Designer - That's what I do!

SUBSCRIBE HERE! Every new pattern release will be delivered directly to your email!

VISIT ME ON FB

It's easy and fun!

PDFPatternDesign by Ingunn Santini, reserves copyrights on all images, text and graphics, including logos, product descriptions, andl text throughout this private Blog.
(With exception of uploaded internet information and images, in these cases there are links to origin sites).

The contents throughout this Blog may not be copied, changed, reprodused, displayed and/or sold in any manner without written consent.